Let’s start with the weapons, shall we?

In our last entry, we talked about the first enemy of the game, the Marine. They pack a machine gun and happen to be rather angry, so it becomes pretty obvious we’re going to need a powerful arsenal to blow them to pieces.

That won’t be a problem. We have planned a plethora of weapons so you can choose your favorite way to bring justice to the cosmos.

Let’s take a look at some of the weapons we’ll come across.

Yes, we could have come up with a new, original name for this iconic gun, but what the hell, Magnum is just badass. “I got a Magnum, run”…the moment you hear that name, you’re gonna pick up your stuff and get out. That’s what this weapon is all about. With a single shot of this beauty, you can fill any average enemy with lead like Dirty Harry cruising the streets of San Francisco.

The strength of this weapon is in its damage, but since it’s rather slow, It isn’t a gun you want to go spray n’ pray with. It works wonders against single enemies though, even if they’re tough.

Either the most useful, or most useless weapon in the game, depending on the situation. If used correctly, it can decimate a whole pack of enemies with a single explosion. If not, the grenades can easily bounce on the walls and you have a high chance of eating one for breakfast.

You’ll be happy to know that the explosions also cause a shockwave that launches you somewhere you probably don’t want to go, but that’s half the fun. It’s not all bad however, as these bouncing grenades can reach places and blow up what other weapons cannot. If you like playing basketball, the grenade launcher is the gun for you.

The Plasma Gun is an automatic rifle that shoots incandescent plasma projectiles as big as bowling balls. It’s an ideal weapon to dispose of enemies in large quantities, but be warned, don’t shoot too near or your face will explode along with your foes. If you’re a special kind of crazy, you can try using these deadly explosions to climb walls and jump over obstacles. Use at your own risk.

it's all about numbers!

With all this loadout, we needed a way to switch weapons in a fast and intuitive way. Our system of choice is the one used by Half-Life, where weapons are sorted in groups and you can navigate through them like a grid. And guess what we called that system? Yep, we called it GRID! Da Vinci would be proud of our originality indeed.

While we were sorting out the HUD, we also worked on the player info. Stuff like health, armor, energy, and experience. As you can see, it’s pretty straightforward.

We give you the Mars Monorail!

Let’s set aside the mindless killing for a minute, and take a look at one of our first maps: The Monorail.

Have you ever thought about how many games have a train level? Well…virtually all of them! And since we couldn’t be less, we got to work on our very own train level, and the result is pretty awesome.

We thought that adding a little twist to the formula would be nice, so we randomized the carriage order every time you start the level. It does follow some rules, so you don’t end up in an endless train of toilet carriages, but you get the idea.

We designed a few different types of carriage: normal, toilets, dark, gore, etc, so it will look somewhat like this. 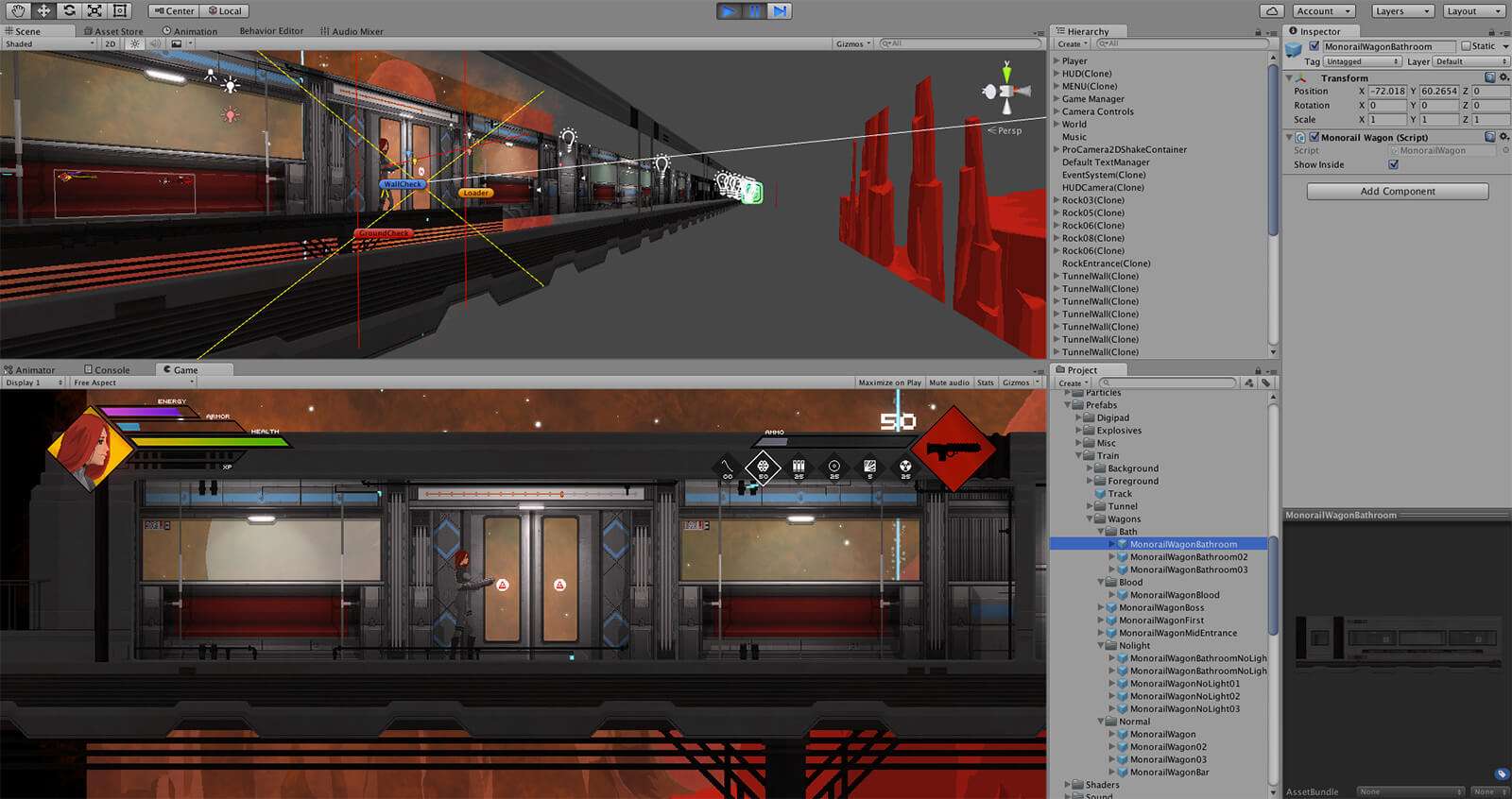 Since we didn’t want it to feel like a conventional corridor, there are doors that open and close between the carriages, and added a rather uncomfortable dizzy motion to the whole thing.

When the train was done, we began working on the environment. Mountains, sandstorms, bridges, tunnels, and all that stuff. We spawn the objects in front of the train and we slide them past in a certain order, giving the level a nice speedy feel to it. Objects won’t spawn on top of each other, so when you enter a tunnel the sandstorms will stop, and so on.

After we added all that, we felt that something was missing. The noise! Who cares if it’s a train from the future! A train is not a train if it doesn’t shake and rattle like crazy. So we added a shaky camera to make you feel sick!

And last but not least, the soundtrack had to reflect a sense of urgency and stress. We must admit even ourselves get a bit uneasy listening to it, but you be the judge. 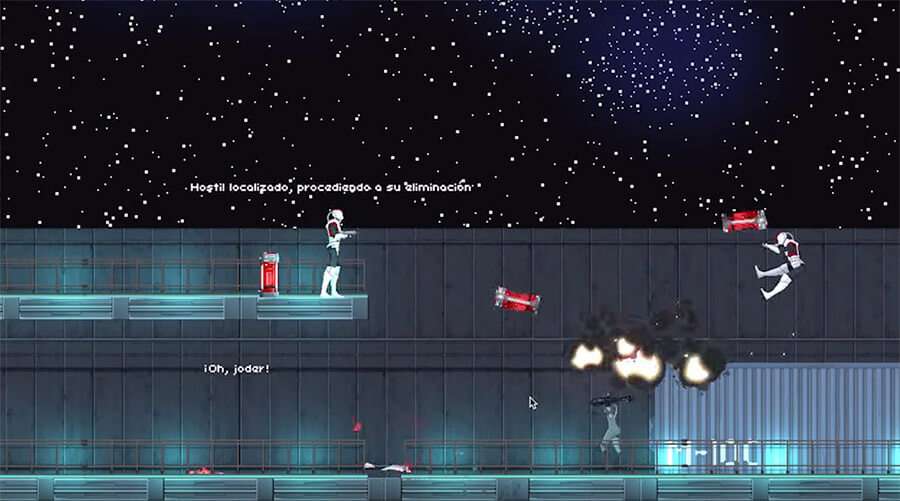