You are going to have a hard time finding ammo, but you better get started if you want to survive. Ammo is scarce, and if you thought we were going to give you recharging or endless firepower, you’re dead wrong.

Joking aside, we have already done all the health, armor, and ammo assets. We’re working on the powerups, but we’ll show those somewhere down the line.

The way it works is rather simple, since we don’t want to confuse the player too much.

We will essentially group all the ammo by weapon type. For example, the pistol and the machine gun use the same ammo type.

Then we have health and armor. We wanted to do something similar to Quake. For the armors we have shards, yellow armor, and red armor in ascending order. For health we have a mini health pack, 25 hp, 50 hp, and then a Mega pack.

After a lot of thought, we decided to switch the AI from RAIN to Behavior Designer & A* Pathfinding.

Basically what happened is that the behavioral trees in rain were starting to get somewhat out of control, and there was still a long way to go to get the results we wanted.

Since the monster we created was growing ever larger and more complex, we made the move to Designer Behavior with A* Pathfinding. With this change, enemies still behave in the same way, but managing, modifying, and creating new behavioral trees is faster and far more visual.

When it was clear that with RAIN it was an endless descent into hell, we had to find an alternative. Among the options we had, the one that caught our eye was Designer Behavior. Since it also included A* Pathfinding, which we have managed to use in 2D with a bit of fiddling, it was the clear option.

Now we have enemies that respond to multiple inputs simultaneously, and as shocking as it may sound, we haven’t gone completely insane trying to get it right. If we had tried it in RAIN, we would have been institutionalized by now. 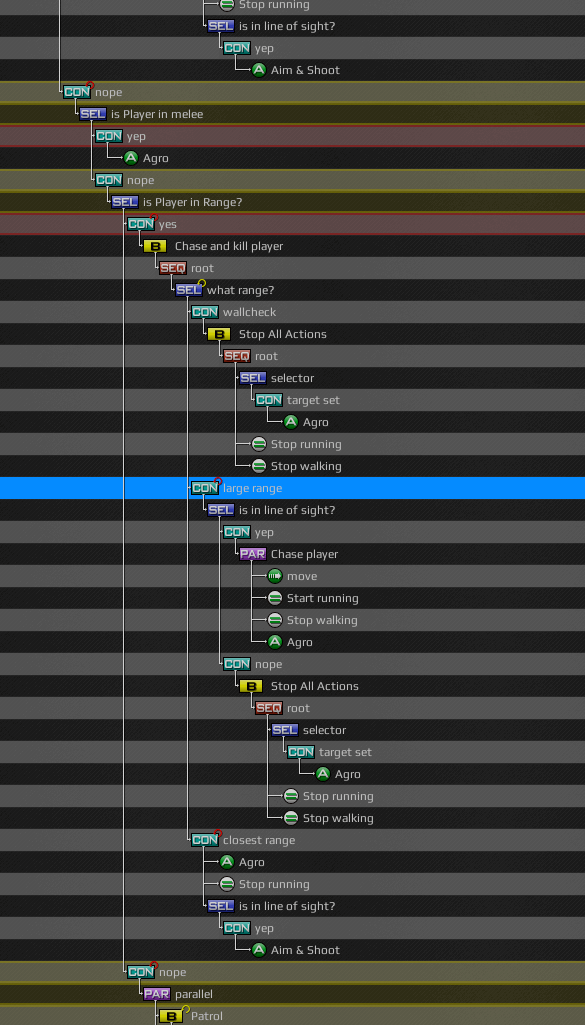 Let’s take a look at the first two weapons we are going to use in Chosen: The Glock PL34, and the Assault Rifle (or Machine Gun)

The Glock PL34 is the classic starter weapon you will want to avoid using at all costs. Attempting to kill enemies with stones is probably more effective. However, it does have its perks. It has a laser sight, and a flashlight bolted on. That small light will prove very effective when we decide to kill the lights in a room mid fight. 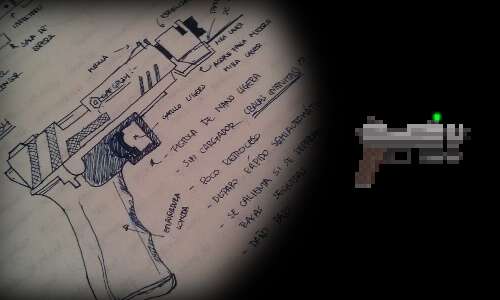 The Machine Gun is the default gun for every shooter ever made. You just can’t do a shooter without it. It would be like a soccer game without the ball, or a politician without the ability to lie. It just wouldn’t work. So to keep up with the long held traditions, we have included our own Machine Gun.

As you may imagine, raw damage isn’t the forte of this gun, and it isn’t particularly effective against heavily armored targets. The upside is that it shoots extremely fast, and if you aim at the soft bits (unarmored limbs, head, gentleman’s sausage, etc) the damage will increase exponentially.

Additionally, you will be leaving a trail of bullet shells wherever you go, as if you were the witch from Hansel & Gretel trying to lure your poor victims into your little candy house of DEATH. Hell, we might even call it the Breadcrumb Gun!